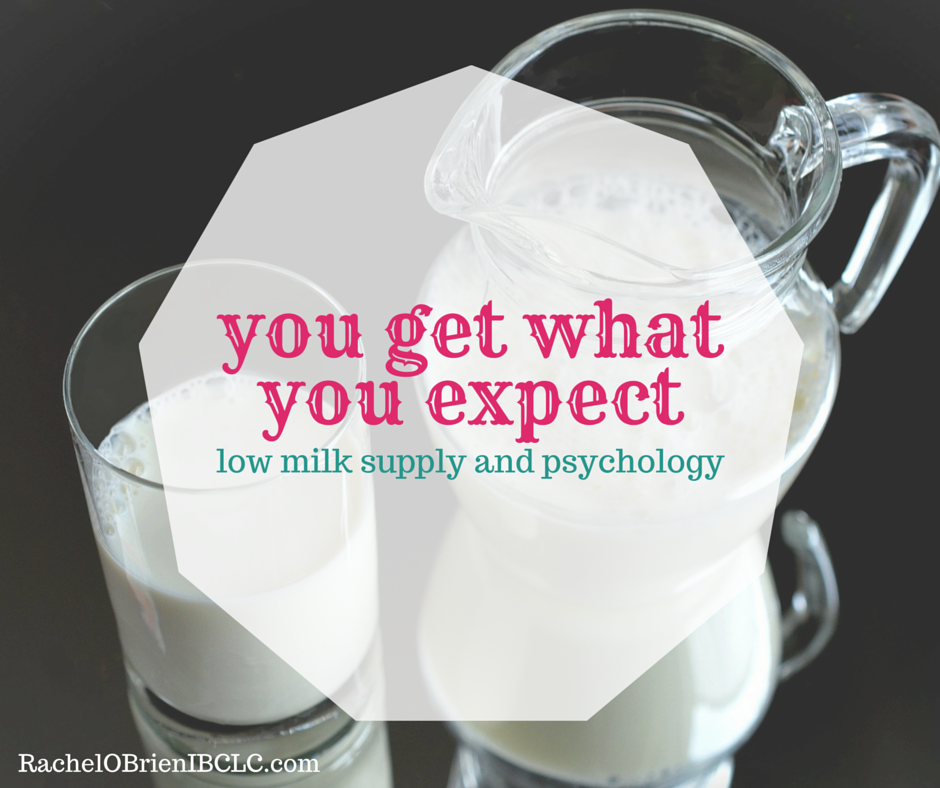 For today’s blog post I considered just cutting & pasting my 21,397 word Masters thesis on U.S. mothers and perceived insufficient milk supply.  It’d be… quite a post, but luckily for you, I’ve narrowed my scope down.  A bit.  You’re welcome.

Basically, it means that people’s minds AND bodies react differently to situations, depending on what those people expect is going to happen.

For example, Dr. Irving Kirsch did an experiment with coffee (Kirsch & Wexel, (1988) Double-blind versus deceptive administration of a placebo. Behavioral Neuroscience, 102, 319-323).  He asked his subjects how they expected a cup of regular (caffeinated) coffee to affect them.  Would they feel energized?

He then had the people drink a cup of coffee and he recorded their changes in mood, motor task performance, and even blood pressure.  The people responded exactly as they expected to react to a cup of caffeinated coffee- both mentally and physically.

But here’s the interesting part- the coffee the people drank was actually decaf.  So people’s bodies reacted based on their expectations, not on the actual caffeine (or lack thereof) in the coffee.

Response expectancy theory is similar to the placebo effect, but it exists even in situations that have no placebo.  A different study looked at nicotine withdrawal; all of the participants were given nicotine gum (Tate et al, Experimental analysis id the role of expectancy withdrawal.  Psychology of Addictive Behaviors, 8, 169-178.)  .  Groups of patients were told to expect differing levels of withdrawal symptoms.  The patients who were told to expect no withdrawal symptoms reported fewer symptoms- and if a group of participants were told to expect a symptom in particular, then they reported experiencing it (and no other groups reported that symptom).

What does this have to do with breastfeeding and low milk supply?

Do you remember what you heard about breastfeeding before you ever tried it yourself?  Did you hear other families talking about having a hard time making enough milk?  Did you see articles in parenting magazines that told you how to AMP UP YOUR SUPPLY or warned you that 49% of mothers said low milk supply was their biggest “booby trap” or that you may have “less milk than the baby needs”?

Or did you see a TV talk show like The View when three of the four hosts said they had breastfeeding problems, including Elizabeth Hasselbeck saying “he couldn’t get enough, and I didn’t have it” and Shari Shepherd saying she couldn’t produce breast milk?

It’s a self-fulfilling prophecy, and we may be perpetuating this when we give well-meaning advice and warnings to others.  Are we setting families up for failure?

Would we change how we talk about breastfeeding and nursing if we knew that our words may cause problems for the person who is listening to us?

What would happen if we made an effort to discuss the positive parts of our breastfeeding experience AT LEAST as much as we warn about the negative parts?

Could a change of attitude change the breastfeeding rates in our country?

Isn’t it worth a shot?

Author’s note:  I have been told that this blog post was not positively received by some who have experienced low milk supply.  As I mentioned in the beginning of my post, my entire Masters thesis was on low milk supply- and I have a deep interest in low milk supply- so while response expectancy theory can be linked to any part of the lactation process, I talked about it’s link to low milk supply in this post.  As I said, this post was in no way meant to deny the real existence of low milk supply, and it certainly wasn’t meant to imply that this is the ONLY reason a mom would have low supply.  Response expectancy theory was only a very small part of my thesis document and I found it interesting and applicable to so many facets of the human experience that I chose to do a standalone blog post about it.