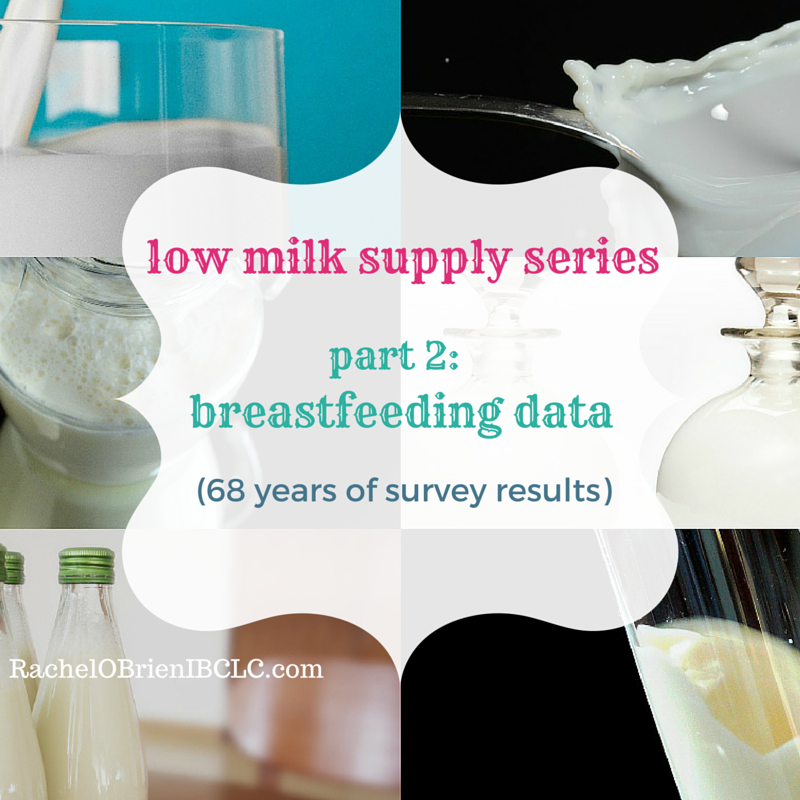 I spent two years writing my Masters thesis on low milk supply, and now I’m translating that thesis into a series of blog posts.

If you’d like to follow along in order, please start at low milk supply series, part 1: research.

Note:  If you’re not big into survey data, your eyes may glaze over while reading this post.  Scroll to the bottom for the tl;dr (too long; didn’t read) if you start to get bored.

The first national study on breastfeeding rates was published in the journal Pediatrics in 1948.  This study simply asked hospital staff if the babies born there exclusively breastfed, exclusively bottle fed, or combination fed when they were discharged.  At the time, 38% were exclusively breastfed, 27% were combination fed, and 35% were bottle fed (Bain, Katherine. (1948). The incidence of breast feeding in hospitals in the United States. Pediatrics 2(3), 313-320.).  No data was collected on milk supply.


The first national survey on infant feeding began in 1955.  The Ross Laboratories Mothers Survey (RLMS) was originally mailed to mothers of babies 6 months or younger, and it asked these mothers what “type of milk” was fed to their baby immediately after birth and then every month of the baby’s first six months of life.  There was no data collected on milk supply.

The RLMS, developed and administered by infant formula maker Abbott Labs, was the benchmark for breastfeeding data in the United States until 2007.  Abbott Labs has changed the survey’s name multiple times since then.  Nowhere on the survey does it indicate that the information is being collected by a formula company, or what the “study” will be used for.

I know, because I got the survey in the mail after the birth of my third child.  I even started filling it out before realizing what it was.

Abbott was questioned about the RLMS in 2014, and they released a statement saying the survey data is used for “consumer research” to “help understand the infant feeding choices and decisions that new parents make for their babies… Gaining an understanding of infant feeding practices for more than 50 years has helped Abbott better understand how to bring innovation to infant feeding” (this quote was taken from a statement Abbott released in response to a 2014 Better Business Bureau review; that review and response are no longer available online from what I can find, but you can read an earlier story from CBS News’ MoneyWatch in 2011: http://www.cbsnews.com/news/time-for-abbott-to-come-clean-about-its-deceptive-baby-formula-research/)

While the RLMS is used quite a bit for breastfeeding statistics in the US, it doesn’t tell us anything about low milk supply.

In 2003 the CDC began to include breastfeeding questions on their National Immunization Survey (NIS), but the NIS doesn’t mention milk supply at all, or the reasons that a baby stopped breastfeeding.  No data on low milk supply.

A different CDC study, the Infant Feeding Practices Study (IFPS) was administered in 1993-1994 and again (IFPS II) 2005-2007.  The IFPS did ask in-depth questions about breastfeeding practices, reasons for weaning, and data we can use to better understand parents’ perceptions on milk supply… but it’s only been conducted twice.

Finally!  Some (limited) data we can use to look at milk supply!

How did the IFPS and IFPS II look at milk supply?  Study participants were asked if their baby had ever breastfed or was ever fed pumped breast milk, and if the mother had completely stopped breastfeeding and/or pumping for their baby.  If the mothers replied with a “yes”, they were asked how old their baby was when he/she stopped nursing or eating pumped milk.

Mothers were then provided with a list of 32 different statements that may apply to their choice to wean their baby.

I consider the statements “I didn’t have enough milk” and “breast milk alone did not satisfy my baby” to indicate that the mom thought she had a low milk supply or didn’t produce enough milk for her baby.

A total of 47% of the responding mothers said that they stopped breastfeeding in part because felt they didn’t have enough milk.  50% said that they felt breast milk alone didn’t satisfy their baby (Centers for Disease Control and Prevention: Infant feeding practices study II and its year six follow-up. (2014). Retrieved January 18, 2015, from http://www.cdc.gov/breastfeeding/data/Infant_feeding.htm).  These two answers were the highest ranked reasons that mothers chose to wean.

The IFPS I & II asked mothers to mark all the reasons they weaned their babies, so we can compare supply concerns with other reported causes of weaning- and make some interesting comparisons.

(by the way, most of the smaller studies that we do have about the perception of low milk supply use the IFPS results and raw data to scaffold their findings and/or develop their survey questions.)

IFPS asked a similar question to people who were combination feeding (using a combination of breast milk and infant formula).  The results were familiar…

Again, I am NOT saying that low milk supply doesn’t exist.  It’s vitally important here that you understand me- I am not, not, NOT saying these parents are making things up.  I’m not blaming anyone, I’m not casting doubt, I’m not accusing anyone of lying.  But things just don’t add up… and why doesn’t anyone care about that?

If only a small number of mothers report that a health provider said their baby wasn’t gaining enough weight… does that mean the providers weren’t aware of normal growth rates of breastfed babies?  Did these moms express their concerns to their health care providers?  Then what happened?  What is going on here?

Stay tuned for part 3– what health care providers know about milk production and insufficient milk supply- and why this matters.

Then in part 4 onward, we’ll delve into what parents know about milk production, what they hear about milk supply, and what symptoms make them suspect low milk supply.

Stick with me, folks.  It’s gonna be a long, bumpy, milky ride.

If you want to take the trip with me, you can subscribe to my blog via email here.