I’m guessing you got a ton of different bottles at your baby shower, when you signed up for a baby registry, or even for free in the mail after Target or Buy Buy Baby or Amazon or whoever figured out you were pregnant.  If you take a peek at the marketing printed on the bottle packages, you’ll see a lot of pretty bold claims…

“designed to mimic breastfeeding… rescued so many families dealing with ‘nipple confusion’ and ‘bottle rejection’ that our Comotomo mama’s coined the term ‘Breastfeeding in a Bottle!'”

“The wide breast shaped nipple promotes a natural latch on similar to the breast. Designed to give a more comfortable and contented feed for your baby.”

What does all of this tell you (other than the fact that every single one of these bottles is somehow THE #1 MOST BEST BREASTFEEDING BOTTLE EVER)?  I know that it tells me– that bottle feeding can affect breastfeeding, and that it must happen often.  Why else would the manufacturers go out of their way to claim their bottles are just like breastfeeding and don’t cause problems?

So let’s say you’re breastfeeding and you really want to use bottles sometimes, too.  How on earth are you supposed to pick a bottle to even start with if every company has similar claims and the boogeyman of “nipple confusion” is lurking around every corner?

That’s where I come in. Get comfy. Let’s chat.

First, let’s quickly discuss nipple confusion.  We’ve come to see this is an incorrect term.  After all, babies aren’t stupid and they aren’t confused– but they quite often have a nipple or flow preference.  Babies are hard wired to breastfeed, if given the chance and properly functioning mouths and brains.  In the beginning breastfeeding is a learned skill for both of you, no matter how strong your instincts are.

But babies are also smart, and they can be creatures of habit.  Breastfeeding and bottle feeding use the same muscles, but often they use those muscles in different ways.  Given a choice, they quite often will choose the option that is easier for them. They’re not confused- they’re making an educated choice!  Look at those baby geniuses go!

Now that you understand babies aren’t confused, we need to talk about something else.  There are no bottles on the market (yet) that act the same way as a breast.  I don’t care if it’s rounded like a breast, I don’t care if the nipple is colored like some fictional person’s skin tone, I don’t care if the manufacturer is so bold as to say it’s developed only for breastfeeding.

When babies latch to the breast correctly they get a large mouthful of nipple and areolae- and depending which study you look at, your nipple and areolae swell 2-3 times in size to fit your baby’s oral cavity.

There are no bottle nipples that expand this way in a baby’s mouth.  They would need to be incredibly soft silicone, so soft that they’d probably break down easily as they were used & washed.  You’d be running through them as fast as you run through diapers.

What am I saying here?  Ignore all the claims from all of the companies about their bottle being best for breastfeeding.  Instead, I want you to keep three things in mind- A) flow rate B) nipple/teat shape and slope and C) nipple tip shape.   Let’s discuss.

When discussing baby bottles the term “flow rate” refers to how fast the milk comes out of the bottle nipple when baby is sucking.  Most bottle brands sell nipples of varying “flows” or “speeds”, and they suggest moving up in “speed” as baby gets older.

Unfortunately bottle flow rates aren’t universal.  It’s not like comparing the MPG of a new car or the carbohydrates per serving of your favorite breakfast cereals.

What one company calls a “slow flow” nipple may let milk through just as fast as another company’s “level 3”.  What’s worse, flow rate is usually wildly inconsistent within the same brand and level of nipple.  Some brands are more consistent than others, but generally you even can’t be sure that two nipples in the same package flow at the same rate!

Us IBCLCs generally like to have breastfeeding babies using the slowest possible bottle nipple.  We want babies to take the bottle slowly (since breastfeeding is usually a slow process) and we want them to have to actively suck to get the milk out.  Babies are smart.  Some babies will get a bottle with a fast flow nipple and say “heyyyyyy, that was easy. Why am I working so hard on nursing? Why have you been holding out on me all this time?!?” and bam, you’re stuck in flow preference land.

How do you know how much milk to send to daycare or to leave with your infant?

My back to work pumping planning sheet for exclusively breastfed babies is here to help you find the answer!
Purchase Here

It’s also important to remember that all bottles drip when you invert them, and MOST bottles will give the baby milk even if baby is just chewing on the bottle nipple.  Do you want your baby chewing on your nipple when they’re hungry?  These factors make bottle feeding awfully attractive for some babies, so with a slow flow you can hopefully minimize the amount of milk baby can get without sucking.

There have been a few recent studies that measured flow rates from various bottle nipples using different methods; they found that the slowest flow nipples are usually not from the brands that are constantly advertising about how breastfeeding friendly they are.

Bottle Selection Tip: Choose a bottle with a slow flow rate, even if your baby isn’t a newborn.

B) Nipple/Teat Slope and Shape 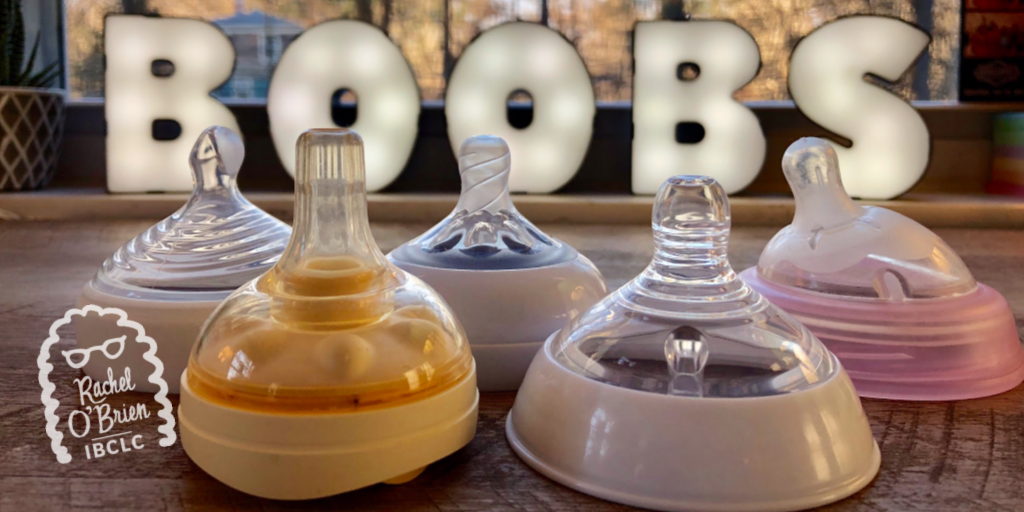 These nipples (left to right Nuk Simply Natural, Medela Calma, Avent Natural, Tommee Tippee, and Chicco Naturalfit) have narrow nipple tips and wide bases. Babies will usually either stay on the tip and suck it like a straw, or they will try to fit the base of the nipple in their mouth and end up with air pockets where the tip meets the base.

Instead, look for nipples that gradually change in shape from narrow at the tip to wider at the base. If they are narrow at the base, you’ll want baby’s lips to be able to come up almost to the collar (plastic o-ring base); if the nipple is wide at the base but appropriately sloped, baby will be able to get the nipple deeply into their mouth with no air pockets. These nipples (left to right Lansinoh, Dr Brown’s Original Narrow, and Evenflo Balance Standard) have nipples that gradually slope from narrow to wide, which is a more natural shape in baby’s mouth.

Bottle Selection Tip: Choose a bottle with a nipple that gradually changes width from tip to base.

I have no science to back this assertion up, but it makes perfect sense to me, so I’m adding it to my list. Look at the bottle nipple tip. Would you want YOUR nipple to be that shape after/while baby sucks on it?  No? Then avoid it when choosing a bottle. Some of these shapes are absolutely cringeworthy.

When a baby is nursing and detaches from your breast your nipple should look round, or the same shape it was when it went into baby’s mouth.  A “lipstick” nipple, a flattened or creased nipple, a pointy nipple- these are all signs that baby may have been mashing your nipple against their hard palate. This causes nipple damage, makes it harder for baby to get the milk out, and it really freaking hurts.

So after all that information… what bottles should you pick?

Generally I think it’s better to start with only TWO different bottles.  If you’re heading to the store, consider one bottle with a narrow nipple base, and another bottle with a wider base and a gradual slope from the tip.  You’ll of course want to choose the slowest flow available in whatever bottles you purchase.  In some cases this may mean that the bottle itself comes with a faster nipple and you’ll have to buy the slow-flow nipple separately.

These are the bottles I carry with me to home visits, and they’re a good starting point: FYI, the “slow flow” nipple that comes with the Lansinoh bottle is still pretty fast flow.  When I bring this bottle to home visits I also bring the slower version of the nipple, which is the Pigeon SS/Super Slow/Level 0 nipple.

Other bottles with nipple shapes similar to these: 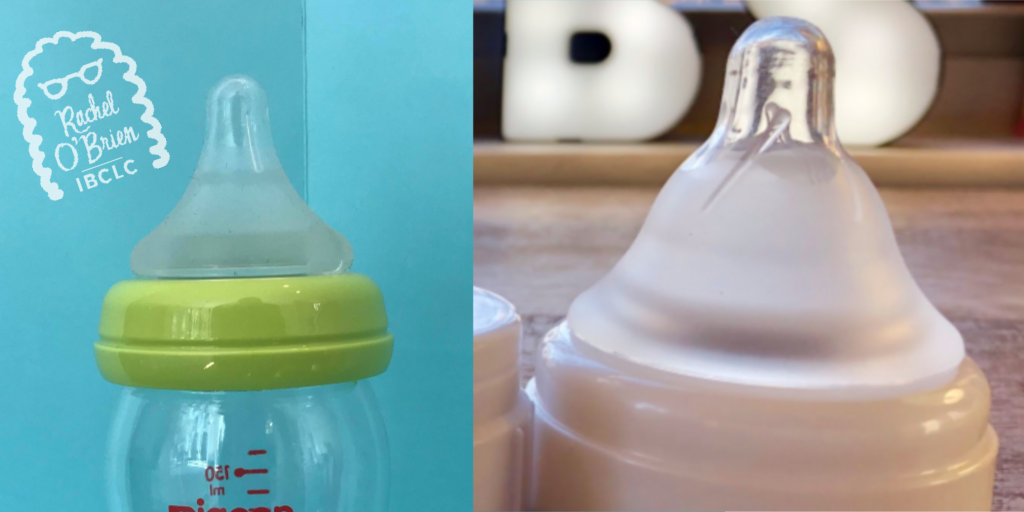 Once you’ve got your two test-drive bottles all washed and sterilized and your milk pumped, you’re ready to give this bottle thing a try.  I often suggest parents start with the more narrow-based nipple that they’ve chosen; if it doesn’t work, use the wider sloped nipple the next time.

For directions on exactly HOW to give a breastfed baby a bottle, read on to part 2.

If you’d like to learn much, much more about bottles for breastfed babies, or if you are a lactation or baby care professional looking to broaden your skills I highly suggest you pick up a copy of Balancing Breast and Bottle: Reaching your Breastfeeding Goals.

Please note: This blog post includes Amazon affiliate links. If you purchase items through Amazon after following my links above, I earn 4% of the purchase price.

59 thoughts on “Bottles for Breastfed Babies (Introducing a Bottle, Part 1)”